Rust stains are signs of a very common drinking water problem – excess iron, which affects many household activities, creates a strong distaste for tap water, and lowers the overall quality of life. 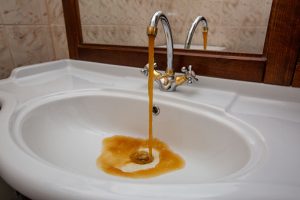 The quality of water used in the home or in production, at the office or at work, delights any attentive modern consumer. The simplest analysis will reveal that the absence of pollution will positively affect the quality of life and work productivity. In some cases, the correct execution of technological processes is simply impossible in the presence of appropriate impurities.

If rusty water is flowing from a tap, then you need to quickly solve the appropriate problem. We will learn how to do this with minimal costs.

Contents of the article show

What is rusty or brown water?

Rust in water is most often caused by iron and manganese. Iron oxide particles are formed by corrosion of the inner walls of the pipe. Normally they are deposited on the pipe walls, but in certain situations, the iron deposits can become turbid and are released into the drinking water.

This can occur, for example, in the case of sudden large water withdrawals (for example, during the pool filling season), during repairs of burst pipes, during maintenance of the distribution network, or during failures of valves and hydrants.

How to make sure it is actually rust?

The brown coloration of drinking water may indicate rust. But it can also be manganese. In the first case, besides rust, heavy metals and germs can be found in the water. The second case would mean that there is already too much manganese in water.

You have the option of having your drinking water tested by a laboratory to determine which substances are actually in it. However, this does not eliminate them. You have to take care of this afterward.

If you attach great importance to your health and to drinking uncompromisingly clean water, then you cannot avoid filtering your tap water on your own responsibility.

What are the common types of iron?

There are many different types of metals found in water. But some of the most common metals that are found in water and that cause the water to have an orange or rusty color are Ferrous iron, ferric iron, and iron bacteria.

Iron bacteria, general term for bacteria that precipitate iron compounds from solutions and deposit them in or on the cell or cell appendages so that they are colored yellow-brown-red; in the strict sense “true” iron bacteria, bacteria whose metabolism is involved in iron oxidation and which gain energy from this oxidation (iron-oxidizing bacteria).

Iron bacteria belong to different bacterial groups. In iron-rich waters, they may be present in large, conspicuous, brownish masses, especially in spring. On surfaces of ponds and ditches, they often form a fine iridescent scum of brownish ferric oxide.

Iron bacteria occur as free-floating or sessile filaments, often as dense coatings in ditches, wells, drainage pipes, bogs, and marshes, as well as in waterworks and water pipes. Due to iron precipitation, they cause blockages and make drinking water undrinkable.

Ferric has an oxidation state of +3 and at the same time is the most stable form of iron in the air. When iron is oxidized, ferric turns into iron oxide and has a greater presence of oxygen, and thus the iron ion is oxidized and forms iron ions, in this case, iron oxide or otherwise rust.

Ferrous iron has the +2 oxidation state, which is formed by the removal of two electrons from the 3s layer of a neutral iron atom.

Why is the water brown?

The brown color comes from rust forming on the inside of the water pipe. When water flows through pipes at a constant speed, the rust sticks to the pipe. But the particles (iron and manganese) are released when the flow rate increases suddenly, such as during a sudden spike in water use. Work on the piping system or a pipe burst is also often a cause of brown water.

What if cold water is rusty?

It could be that the indoor pipeline is no longer suitable for carrying drinking water. This is usually the case in old houses where pipeline maintenance has not taken place for a long time. Rust has then formed to a greater extent in the pipes where this rusting is often also already visible on the outside of the pipes.

Sometimes the pipes are even corroded to such an extent that small cracks have appeared here and there where the water drips out. Chances are that brown water will come out of these old pipes. The drinking water company will not be able to provide a solution in this regard since the problem is entirely indoors. It is advisable to replace these old pipes with new ones as soon as possible.

What if hot water is rusty?

Some people experience hot water with a yellow or light brown color. Often this is due to external factors such as soil in the water due to work in the neighborhood. However, there is a specific case where this also occurs, namely in hot water in the presence of a water softener. 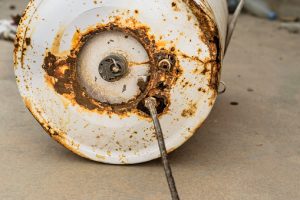 When installing a new water heater (slow heating system such as an electric water heater, double-walled oil, or solar water heater; not with flow-through gas or duplexes) or when first occupying a new home, you should always turn off the water softener for the first few months.

This creates a thin layer of limescale in your water heater and pipes. This layer protects the metal from the sometimes aggressive properties of soft water. Why a few months? That’s the time it takes for a stony layer of limescale to form.

What if both cold and hot water are brown?

The sediments or rust that can collect in the water supply network over time are the main causes that make the water orange or discolored. Also when you have both cold water and hot water with rust, this may be due to damage to the water pipes or that they have been processed recently because rust enters the water from the circulation pipes and makes it so that regardless of whether you use cold water or the hot water will be rusty again.

Is rusty water safe to drink?

Copper and lead in water

Is it safe to bathe in brown water?

Yes, it is safe. Iron and other types of metals can change the color of the water to brown due to rust. Therefore, it is not safe to drink it, but there is no health problem to bathe with it.

How to clean rusty water?

Most often, rust in the water occurs in pipes that have not been used for a long time. Therefore, when restarting these taps, the water should be allowed to drain for a few minutes without being used. Often this helps, and the rusty components are flushed out, and everything becomes clear.

The very best option, unfortunately equally the most expensive, is to replace the house water pipes. Corrosion-resistant materials should be used here. Stainless steel is certainly the best but is often ruled out for cost reasons. Alternatively, chemical agents can be used. These form a protective layer in the water pipes and prevent rust in the water. Inhibitors made of phosphates and silicates can be used here.

Hire a plumber in your area

Plumbers install, maintain, and repair plumbing and heating systems. Many of these activities cannot be carried out by amateurs. If amateur craftsmen do try their hand at it, there is often a certain risk involved. Insurance companies often do not pay for any personal injury or damage to buildings if the professional connection cannot be proven. So before you repair a heating system or connect a gas stove on your own, it’s better to let a qualified plumber do the work.

The costs are strongly dependent on the desired activity. So it is not possible to make a general statement here. Most plumbers charge an hourly rate of between $40 and $70. However, some tradesmen also set a flat rate for certain activities. Travel and material costs may be added to the basic price.

In summary, rusty water is bad for health and household appliances. The water can be purified by renewing the water pipes or using water filters. The result is clean and high-quality drinking water.